greenSwitch is a remote control circuit breaker for switching large currents safely. Remote control is either via an optional control switch or via greenView.

greenSwitch has two inputs (LVP and OVP) for the direct connection of a battery management system (BMS). However, it can also be used as a normal power relay.

The device supports various operating modes when connecting a BMS, which can be selected via a dip switch:

Mode 0, LVP:
The device responds only to the LVP control signal from the BMS.
For switching loads (inverters, motors, etc.) to protect the battery from deep discharge

Mode 1, OVP:
The device responds only to the OVP control signal from the BMS.
For switching charging sources to protect the battery from overcharging

Mode 2, LVP:
Same as mode 0, but with inverted inputs.

Mode 3, OVP:
Same as Mode 1, but with inverted inputs.

Mode 4, LVP - OVP:
Both LVP (undervoltage) and OVP (overvoltage) are evaluated. Especially for users with finished system,
Which would like to convert to lithium batteries and charge and load is not easily separable due to the finished cabling.
Charging sources and loads are connected to the greenSwitch

The last two operating modes have been specially developed for the conversion of existing lead-acid batteries to lithium technology for caravans and boats.

Switch states are indicated by LEDs on the device and the optional remote switch. When using greenView, e.g. The switching state, the temperature and the estimated current are graphically displayed on the TFT. 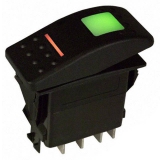 Customers who bought this product also bought the following products:

Photovoltaic charge controller with maximum power point tracking, graphic display, RS485 communication and many more features. This version doesn't has a water and dust proof case. It doesn't has a GSM/GPS modul. It can't be remote monitored and controlled via mobile phone network.

Please enter the article no. from our catalogue.

The newsletter can be canceled here or in your Account at any time.